THE ROLE OF LAW IN THE SEXUALISATION OF POLITICS IN NIGERIA

Men and women are sexual beings that relate harmoniously together but there are sexual politics in
virtually all aspects of interpersonal relationships. Sexual politics is how power is shared between men
and women, whether evenly or marginally. These relationships between the sexes are viewed in the
political ideology as political sexualisation. However, the many factors and interplays of issues in this
milieu propel this study to critically examine “the role of law in the sexualisation of politics in Nigeria.”
The specific objectives were to appraise the incidents of sexual politics between male and female, to
examine the challenges faced by the female folk, and to as well appraise enactments both national and
international made to curb the menace of sexual politics marginalization in the Nigerian society, and
finally made some recommendations. The research design and methodology was doctrinal approach,
using analytical and descriptive research methodology. The main sources of data collection were various
legal documents and materials, both from the library and internet, and covering the primary sources and
the secondary sources. For the summary of findings, it was submitted among others that the term politics
refers to power-structured relationships and arrangements, whereby one group of persons is controlled
by another, and patriarchy on the other hand is an institution perpetuated by such techniques of control,
thus giving a working definition on how politics is conceived. It was further observed that while politics
is concerned with getting or using power within a particular group or organization, patriarchal
government can be taken as an institution whereby half of the populace which is female is controlled by
the other half which is male. Sequel to these backdrops, it was recommended that the distance between
the real and the ideal which result in contradictions and exceptions should be bridged within the system,
also that patriarchy as an institution should be less dogmatic in male dominance, and with the import of
democracy, females should not be discriminated in holding political power or occupying any political
office, notwithstanding their sex. Finally, this study was made to be significant to scholars of
jurisprudence, political philosophers, feminism and human rights advocates, as well as being relevant to
the legal practitioners, politicians, economists, and political scientists, as well as the judges/justices in
any case relating to women political rights. 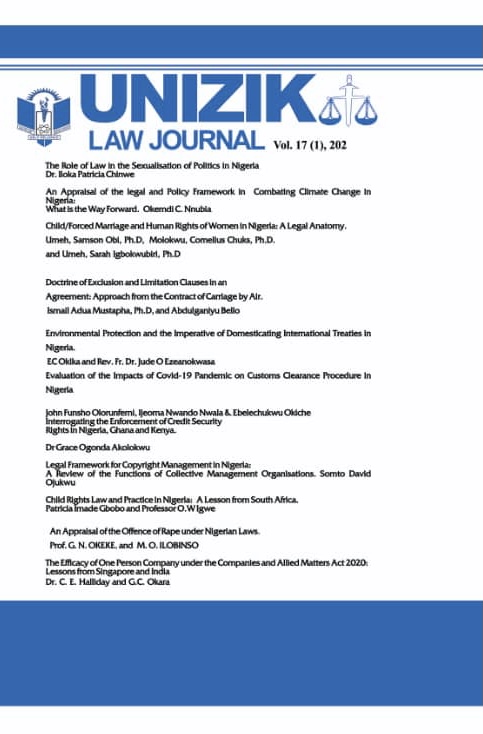 ILOKA PATRICIA CHINWE. (2022). THE ROLE OF LAW IN THE SEXUALISATION OF POLITICS IN NIGERIA. UNIZIK Law Journal, 17(1), 1–14. Retrieved from https://journals.unizik.edu.ng/index.php/ulj/article/view/881
Download Citation