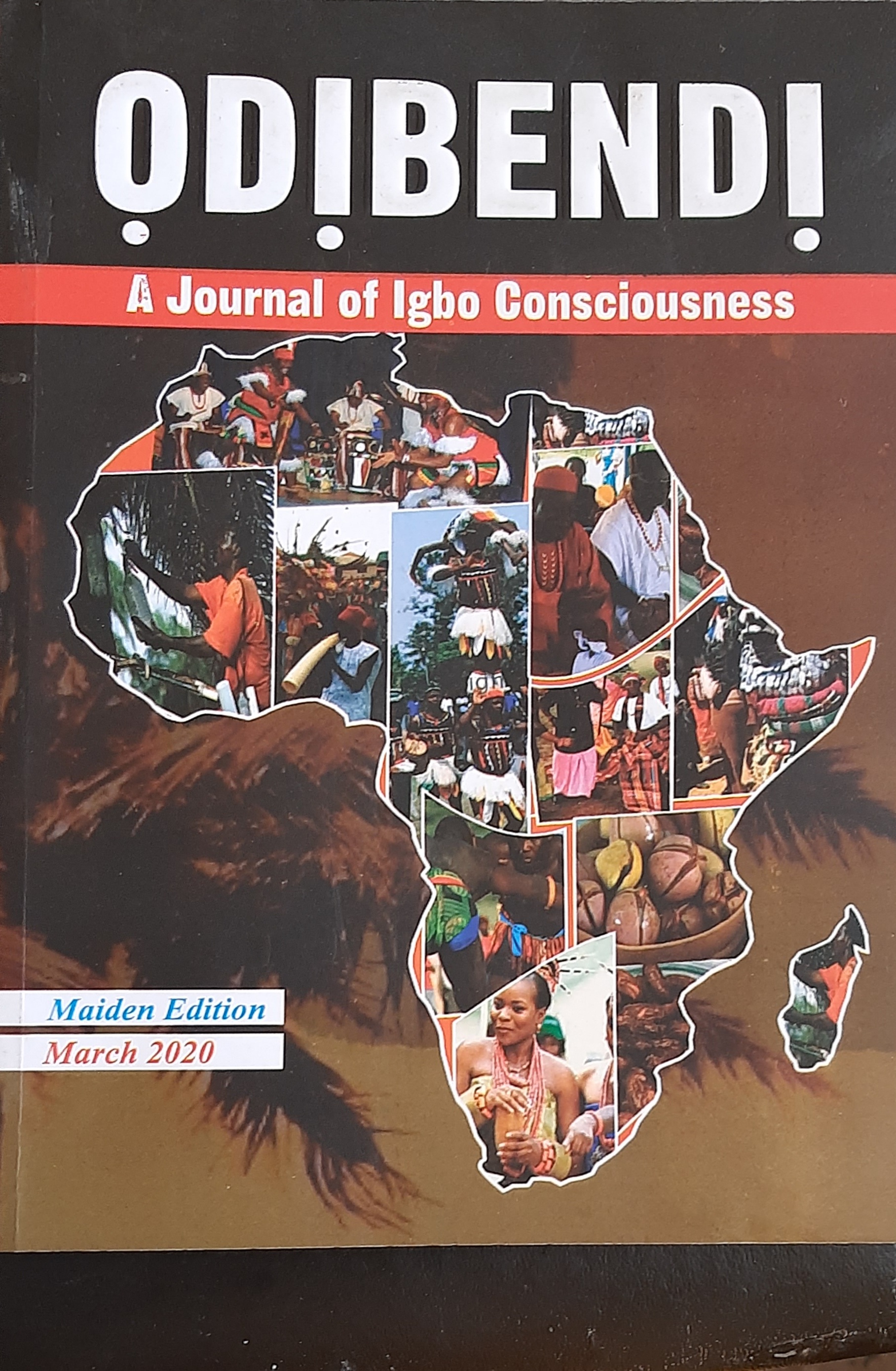 EDITORIAL COMMENT
This is the debut of ỌDỊBENDỊ: A Journal of Igbo Consciousness. This edition takes care of the
entries for a conference on yam and the ceremony about yam. So some titles in this publication
focus on yam and the new yam festival of the Igbo people of Nigeria. The authors, who mostly
wrote in Igbo, are Cecilia A. Eme, Patrick Ik. Umezi and Florence U. Ibeh, Edith N. Onukawa,
Chinenye C. Olakaibe, Basilica N. Eweoma and Anthony C. Mgborogwu, Christian E. C.
Ogwudile and Ikechukwu Okodo.
Some other authors looked at other aspects of the culture of the people. They include Gladys I.
Udechukwu that studied Igbo Culture Symbols and Ogochukwu R. Ifeka who wrote on covenant
which is Ịgba Ndụ in the Igbo language. Charles A. Nneke also wrote on a culture topic with
respect to the Ijele masquerade of Igbo people and Chinelo E. Ude-Akpe that delved into Ịjụta
Akwụ, that is, the Igbo culture of recalling the spirit of a missing corpse for the purpose of the
funeral. Ifeyinwa C. Isidienu and Ann C. Onyekelu looked at the masquerade as the instrument
of stability. Still on culture, Ihuoma E. Obienusi and Chinyere P. Chikwendu wrote on the effects
of patriarchy on women in the Igbo rural community, and Stanley C. Mgbemena and Benson O.
S. Udezo discussed the real Igbo people of Umuchu before the arrival of Christianity on their
soil. In addition, Fidelis C. Aghamelu, Anothony C. Nwafor and Anthony C. Onwuliri
categorically reflected the highlight of communal life over individualism in African society.
The need for developing the Igbo language caught the interest of some authors. One of them is
Chinweude N. Ugochukwu who married the Igbo language with globalisation. Another is
Aloysius U. Umeodinka that observed the brightful future of the university graduates of Igbo
Studies. And Edith U. Nwobu calls for the provision of enabling environment for the youths’
learning of the Igbo language rather than focusing on the older generation, as a way forward.
Literary Studies is not left out in this edition. Ogochukwu R. Ifeka studied some selected literary
works that concern covenant making to state that covenants create situations of trust among those
that enter into them. And Obiageli T. Nsolibe traced prophecies in the literary works she studied.
The rest of the authors include both Nnaemeka C. Abamara and Chinwe I. Onyemachi who
studied the effect of culture shock on Igbo immigrants in the diaspora. Rev’d Daniel I.
Ilechukwu and Chiamaka P. Ilechukwu assessed the Pentecostal missionary activities in Nigeria
from the end of the Nigerian-Biafran Civil War up till date. And Clement N. Okodo analysed the
duties of headmasters which are the sine qua non for the good administration of primary schools
in Nigeria.
Prof. Ikechukwu Okodo
Editor-in-Chief
March 2, 2020